Continuing on from yesterday’s post about disability pride in the cerebral palsy community.

The Deaf community has a long history of persecution and resistance in the United States. Historic inventor Alexander Graham Bell played a pivotal role in the promotion of “oralism” or speech and lipreading rather than ASL or “manualism” for deaf students. His own mother was deaf, and his father and grandfather had developed a system of “visible speech” to aid deaf students in learning how to lip read. Phonetic symbols dictated how the mouth should move as the word was stated. Deaf assimilation into mainstream hearing culture was the goal of oralism, including increased job opportunities working for hearing employers, and desired (by hearing people) decrease in deaf intermarriage.

Bell feared an epidemic of hereditary deafness resulting from such unions. He eventually married one his own deaf visible speech pupils. Bell traveled the nation, visiting politicians and deaf schools, promoting the virtues of oralism and generally discouraging the use of American Sign Language (ASL) among deaf people as a means of communication. He supported putting hearing teachers in charge of deaf classrooms, forbidding students to use ASL in the classroom or on school grounds, and eventually abolishing schools for the deaf and moving those students into hearing schools, where it was presumed lip reading and visible speech would be sufficient for full participation. By 1920, 80% of deaf students were taught without the use of sign language.

Deaf-led organizations fighting to preserve sign language in the classroom and in deaf life emerged, including the National Association of the Deaf. The NAD campaigned against oralism in every available medium, from teacher’s conventions to deaf news outlets. Starting in 1910, they produced a series of educational films, both as a campaign tool and as a means of preserving visual records of sign language for future generations who might be deprived of their “natural language”.  This interpreted quote from the film “The Preservation of the Sign Language” demonstrates the fervent passion deaf activists felt.

“They do not understand signs for they cannot sign. They proclaim that signs are worthless and of no help to the deaf. Enemies of the sign language, they are enemies of the true welfare of the deaf. We must use our films to pass on the beauty of the signs we have now. As long as we have deaf people on earth, we will have signs. And as long as we have our films, we can preserve signs in their old purity. It is my hope that we will all love and guard our beautiful sign language as the noblest gift God has given to deaf people.” – George W. Veditz

Over the intervening years, the NAD has protected the rights of deaf automobile drivers, been instrumental in the passage of the Americans with Disabilities Act, and pushed for legislation requiring captioning of film and video media.

Another organization crucial to preserving Deaf language and culture is Gallaudet University, the world’s only university for deaf and hard-of-hearing students. It was there that a hearing professor named William Stokoe published a dissertation showing that ASL is a language with unique syntax and grammar. This led to the national recognition of ASL as a language, and contributed to greater social acceptance of sign language use. A 1964 Congressional report on deaf education pronounced oralism a “dismal failure”.  In the 1970s, Total Communication became the benchmark for deaf education practice. TC allows for a variety of communication methods, including speech, signing, finger spelling, typing, lip reading, etc. 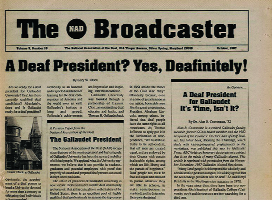 In 1988 Gallaudet University became the focal point of the Deaf community struggle, as students and faculty together joined in protest, demanding that the over 100 year old school have a Deaf president for the first time. Two qualified Deaf candidates for the position had been passed over by the Board of Trustees in favor of a hearing candidate. Deaf President Now protesters responded by shutting down the entire campus, blocking entrances and disrupting normal activities. Several were arrested and thrown in jail. These arrests made national headlines and many in the hearing world became aware of Deaf self determination for the first time. After one week of DPN protests, the seventh and final hearing president of Gallaudet University resigned and was replaced by the university’s first Deaf president, King Jordan.

Check back tomorrow for the third and final post in this series, on the autistic community!