When American news media reports on abortion, the images they choose to go with the stories make a difference. While the majority of abortions (89%) in the United States happen before 12 weeks, many of the pictures chosen for abortion articles display illustrated fetuses far beyond 12 weeks, or disembodied pregnant bellies in their third trimester. The reality of abortion is obscured with these pictures, and these pictures bias readers in favor of anti-abortion positions.

Take the latest cover of Newsweek for an example. A stylized computer rendering of a late term fetus graces the cover. Most abortions look nothing like this cover. My own abortion at 5 weeks looked indistinguishable from a heavy period.

Or how about this stock photo chosen by USA Today to accompany a story about a woman in her 17th week of pregnancy. When I was 17 weeks pregnant with my son I had a flat belly and no clue I was expecting. I certainly didn’t look obviously pregnant to anyone and everyone like this.

When the UK Mirror republished an abortion story from Reddit where the patient didn’t disclose how far along her pregnancy was, they chose this image of a visibly pregnant belly. Because nearly 9 out of 10 abortions happen in early weeks, almost no one goes into the clinic looking like this. When they do, it’s because a pregnancy they chose to continue is no longer viable.

In addition to being inaccurate, these images are also what anti-abortion publications choose. CSN News, which claims there is an obvious liberal bias in all other reporting, selected this AP photo for a story inflating the numbers of black women who seek abortions.

When anti-choice site LifeNews reported on the complete abortion ban in the Dominican Republic, they chose this late-stage fetus drawing. Again, where abortion is legal and accessible, pregnant people get them within the first twelve weeks of pregnancy almost all of the time. This isn’t what an abortion looks like. 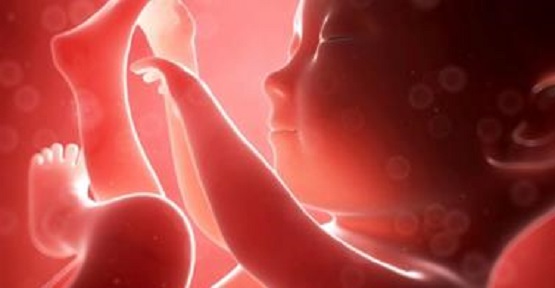 Conservative news site The Daily Caller takes this ridiculousness to its “logical” end, by choosing a photograph of a newborn in diapers to represent abortion. Abortion is pregnancy termination. So is birth. This little babe is not at risk of being aborted.

Some news sources are getting better about this, no longer showing fetal art or disembodied bellies but instead showing photos of protesters or pictures of abortion clinics and their signs. Here’s a recent example of such an AP photo found on Salon.com.

But even these images are flawed. They suggest that abortion is primarily about fetuses, abortion clinics, and protesters. Each one of these images erases the most important person from the conversation – the person who is pregnant. Whether showing medically inaccurate drawings of cute fetuses or headless pregnant torsos, pregnant women, trans men, and non-binary people aren’t part of the literal picture.

It’s hard to convey “pregnant belly” visually without jumping to the third trimester. It’s hard to convey “fetus” visually without jumping to the third trimester. Maybe that means instead of bellies and fetuses and protesters and clinics, we should illustrate these stories with pictures of boring, average, every day, non-visibly-pregnant mostly women. When those aren’t available, charts and tables of real abortion facts – like 89% of abortions occur in the first 12 weeks before many patients are even showing. Because it’s pretty clear from their photo choices that the anti-abortion crowd favors these images that erase the people pregnancy happens to.